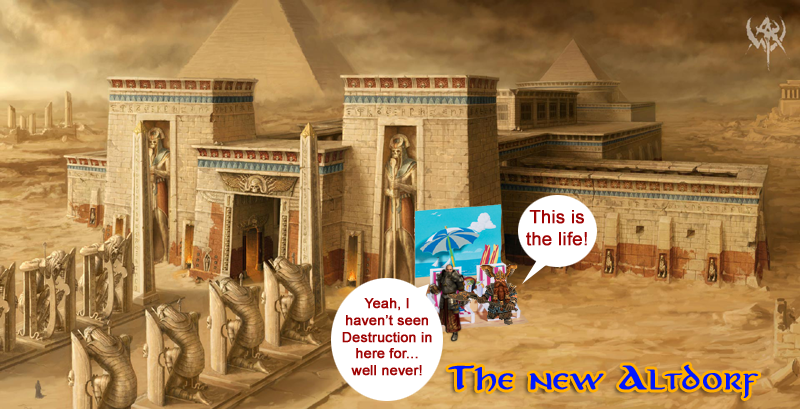 On Dark Crag Order has our King on farm status.Â  We’re locked out of the city more than we’re allowed to enter these days.Â  Realm balance has been a point of discussion since, well, before launch.Â  As predicted, this issue isn’t that Destruction completely outnumbers Order or vice versa.Â  The problem is that one side completely dominates the other and which realm it is varies server to server.Â  On Dark Crag it’s Order, on other servers it’s Destruction, and on some like Phoenix Throne it’s fairly even with the lead switching back and forth with whichever way the wind blows.

What impact will this have on Land of the Dead?Â  Access to this new content – the only new content since launch – is going to be restricted.Â  You’re only going to be allowed to enter if you’re winning the realm war (or a modified version of it).Â  If you’re the losing realm then you’re shut out in the cold.Â  Ideally the winning side will rush in to LotD and while inside the losers will have an easier time taking back and winning the dungeon in order to get their shot at owning the dungeon for however long the minimum time might be (I forget if it’s an hour or whatever).Â  The issue is that when a disparity like we see in Dark Crag exists, Order (or the winners) have the ability to lock down LotD and defend it at the same time.Â  If they’re capable of keeping us out of our own capital city then they’re capable of keeping us out of LotD.

I’m not okay with that.Â  I’m playing Warhammer Online again only because of Land of the Dead.Â  If I can never get inside the place then I will not play.Â  Before I stop playing I will switch servers which is my absolute last resort.Â  I love my clan in WAR and I’m making friends.Â  I like my Shaman (for the first time in months) and I’m not ready to abandon that.Â  There are solutions to the problem – let’s find them.

In DAOC the Darkness Falls mechanic worked (most of the time) because the tug of war was between THREE REALMS.Â  When one owned it, there were two realms left out in the cold to fight each other and the realm who owned DF.Â  This meant that unless one realm was a powerhouse, to the point of being a server dominator, they never owned the place for too long and when they did the others still had a realm to fight.Â  No such system exists in WAR; we have two realms.Â Â  We need more drastic measures to balance populations and balance server domination.Â  Maybe queues are the answer to balance the realms – yes, the problem is that big.Â  I’ve been a fan of incentives and rewards for the underdog instead of penalizing the victor though, so if Mythic can come up with ideas that fit their vision then by all means.Â  I fear that without a clear and direct approach to this problem the players will be left with having to watch it fix itself; players on the losing side quit in such large numbers that the winners get bored and quit, thus evening things out for the war to start back up fair again — never a good thing.

On Dark Crag Order can keep us out of our own city dungeons by farming our King, stop us from taking forts so we can’t get RvR to get gear, and now they’ll be able to keep us out of Land of the Dead so that we can’t progress into new content to gear up.Â  Unless one is already geared to go to Lost Vale, the majority are left with nothing but annihilator and Bastion stair equivalent gear.Â  The problem would compound itself and worsen exponentially the longer it is left unresolved.

If Order wins then they deserve to win – I’ll never argue that they don’t.Â  They deserve to win and they deserve their rewards if they outplay.Â  However, it does reach a point where the losing side deserves an aswer to the question:Â  “Will we ever be able to recover and have our chance at winning?” Right now it looks like on some servers people are paying for a game where they can never hope to even have a chance of winning.Â  No one likes to pay without being able to play.Â  Will that be the case with Land of the Dead?