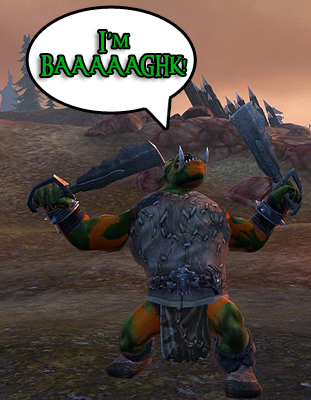 Land of the Dead coming soon…. [LotD Podcast 1 and Podcast 2 – check them out!]

All of the above are why I decided to resubscribe to Warhammer Online.Â Â  How well the token system works, how the changes to keeps have affected the meaningless realm war, just how much this polish has smoothed over the rough edges, and just how well Mythic pulls off implementing Land of the dead will determine how long I stay.Â  Out of all the above, Land of the Dead is the most important to me.Â  I decided to resubscribing now, instead of in June (or whenever it is implemented), because I want to hit the sand running in LotD.Â  I want to have a character that will be able to take advantage of the content and I want to already be in the WAR mindset, instead of playing catchup.Â Â  LotD, from the video podcasts, looks like it’s going to be everything I want it to be and more (assuming the massive number of PQ’s don’t !#*& it all up.)

Needing to be ~level 25 to enter (which is still too high if you ask me) means I have a little bit of work ahead of me.Â Â  I’m going to take it slow.Â  I want to experience a lot of T2 keep sieging to get a feel for how much sense the token system’s implementation makes.Â  I’ve heard that the token cost is extremely high for gear, and given how fast people progress through T2 whether they want to or not, I want to see first hand whether Mythic got it right or not.Â  Right now I’m level 9 and I’ve earned a total of 12 Recruit Medallions and 1 Scout medallion.Â  That won’t get me much.

I decided to play Destruction on Phoenix Throne.Â  It turns out that I have several friends there.Â  Ostermark merged into Phoenix Throne which means Snafzg from the Greenskin will be able to play with me.Â  Several people that I played with, and even guilded with for a short time, on Order have rerolled Destruction (some time ago) and are mostly all level 40.Â Â  Playing with all their alts will help me to feel included until I can group with their mains.Â  There are a lot of people playing on this server.Â  I expected a lot less to be honest.Â  Although it’s nothing like launch there are still people everywhere — Certainly more than you’ll see randomly in Darkfall.

Playing a Choppa is already fun.Â Â  I’m not a god and I can’t kill everything (darn!) but the class is really useful.Â  I run in, swing my axes like a crazed loon and kill a couple before I either have to run or die.Â  Either way, I push the front lines or I rip apart the back (I can even do both with a good healer).Â  It’s fun to kill stuff quickly, but it’s more fun to do it in the Choppa style.Â  The class feels like it will be as close to the DAOC Savage as I’ll get and that’s a huge draw — My highest RR in DAOC was a Kobold Savage…. or was in my Shaman… maybe my Chanter… I dunno.Â Â  Either way, I tore stuff up with my Savage and I want to rekindle that style of play.

I’ll keep you all updated on whether or not it’s worth it to resub to WAR now, or if you should wait.Â  I’m already bored of questing after half of T1, so I’ve spent most of my time up to level 9 RvRing (In frontiers and scenarios).Â Â  I won’t be devoting all of my time to WAR though since I still plan to spend my prime time in Darkfall.Â  To be honest, I enjoy the overall feel/gameplay of Darkfall a lot more than WAR.Â  The problem is, that enjoyment or fun is had in very short, random, and very spread out bursts. Â  In WAR I can have less fun, but have it more often.Â Â  LotD could be the deciding factor for me, and will ultimately decide if I drop WAR forever or if I continue to subscribe.Â  Until then, WAR will be a side project for me.