Every so often a game comes along and does something that catches my eye.Â Â  This time it’s a RTS/Persistent Online Card Game called BattleForge.Â  I was almost completely unaware of the game’s existence until I was directed to the Beta signups by a friend (Bartlebe!) and shortly thereafter admitted into the testing program.Â  I want to share with you all why Battleforge is not only on the top of my current favorites, but why the game is different from any other currently available and brings with it the potential to not only last a long time in this market but spawn future RTS/Card games just like it.

I like to start my reviews and impressions off by quoting official sites.Â  It’s a great way to gauge how well the developers deliver on their promises and how well the features live up to their hype and potential expectations from a prospectivel player/customer.Â  Right from their ‘About the Game’ section:

“Experience real-time strategy in a whole new dimension! Every battle is different, every army unique. Create your own fighting force from mighty creatures and powerful soldiers. Lead your army in epic online battles – together with your friends or against them!”

“Fight alone in single-player missions or in a team with up to twelve participants. In addition to 1on1 duels, various tournament modes and a fiercely contested ranking list await you in PvP.”

“The cards represent your tools of war: units, buildings and spells that are conjured directly onto the battlefield. Assemble the perfect fighting force before the battle, choosing from your ever-increasing collection, and lead it into the battle. Rare cards open up completely new tactics for you and are highly sought after for swapping at the in-game market place!”

BattleForge is far more than a RTS game.Â  It’s a collectible card game, strategy game, and persistent multiplayer experience all in one.Â Â  BattleForge is ONLINE ONLY and allows players to collect cards (both from winning games and buying them [more on this later]), creating decks, making friends, and then fighting with or against them online in a persistent lobby/world experience. 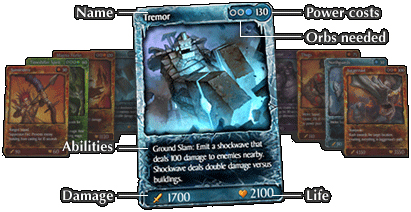 Players start off with a large assortment of cards from all of ‘The Powers’ (Shadow, Frost, Nature, and Fire) and can begin customizing their decks immediately, or play around with the pre-made decks.Â Â  Deck building is a huge part of BattleForge because everything you do when playing the game hinges upon the cards in your deck – you’re allowed 20 different cards.Â  This is where buying, trading, and winning cards comes into play.Â  The game uses an in-game auction house that MMORPG players will be very familiar with to allow players to trade cards directly from the lobby.Â  Players can also do direct trades with each other, which is facilitated through a trade channel.Â Â  Now here’s where the most interesting part comes in with these cards… you can also buy Booster Packs with real-life currency.Â  You do so by purchasing what I’ve come to call “BF Points” and then spending those points at the in-game store to buy cards.Â  Every player in the beta started off with 2000 points to buy booster packs with (250 per pack) and rumor has it that in release you’ll start with 3000 points.

Opening Booster Packs in-game has that same feeling that is does in real life.Â  You’re excited to open the pack and find rare cards but also scared to find nothing but the cards you own already.Â  It’s a gamble – exactly like it is in RL when you buy booster packs for your favorite card games like WoW TCG and MTG.Â  The cards come in common, uncommon, rare, and ultra rare and come in create, spell, construct, and building form.Â Â  Creature cards have health/damage and spells have special effects which are listed.Â  All cards have a power cost to summon them and a prerequisite cost for how many Orbs you must have of that type (think Magic the Gathering’s mana) which you can see in the image to the right.Â  Orbs requirements can call for specific orb colors or “any orb color” like a colorless mana.

Customizing your deck is done entirely through the lobby with a very easy to use graphical interface.Â  You can also upgrade your cards from this feature as well.Â  Upgrading your cards is done when you earn upgrades through PvP (playing against other players) or through PvE (doing the campaigns with friends).Â  Cards drop as loot from winning campaigns and against other players.Â  When you win cards you are able to roll “Need/Greed/Pass” just likea MMORPG and divy out the loot – this is a great feature since your friends may be using a Nature deck and you’re playing Shadow, so splitting the cards how you guys want is a great feature.

BattleForge plays like an RTS game when you get right down to it.Â  However, your cards are the key.Â  Displayed at the bottom of your screen you can see all 20 of your cards and you will be able to summon them if you have enough power (think resources) and Orbs (again, think MTG).Â  You are able to summon your cards at any time as long as you meet the costs and in any quantity you are able to, depending on how many charges you have left of that card (they recharge during the battle).Â Â Â  Power is gathered by capturing nodes on the map like you would in many other RTS games.Â  Orbs are obtained in a similar way by capturing and building orbs on the orb points.Â  When you capture an Orb location you get to choose which type of Orb you wish to build, which is key for multiple color decks.

When you summon a card, it’s like building in a RTS game.Â  Units are summoned instantly with a brief ‘dazed’ period and buildings take only a few seconds to contruct.Â  Spells are cast instantly and many times affect friendly units as well.Â  Creatures/units control exactly like they do in most RTS games and can be micromanaged to be used to max efficiency.Â Â  Creates, buildings, and constructs many times will have abilities that you can use.Â  Some creatures can even change forms like a StarCraft siege tank or cast spells like a Warcraft 3 Sorceress.

The goal of the game in a duel/PvP game is to destroy your enemy.Â Â  Each game that I have played so far has played out entirely different.Â  What deck type you use and what your enemy uses will often decide the strategy you use.Â  The Powers each have their own inherent strengths; nature is very balanced and supportive whereas Frost is very defensive.Â  The basics of the game are all the same though, and controlling the map is key.Â  Turtling and not being aggressive will get you overrun very, very quickly because your enemy will gain access to more power and more orbs which allow him to summon bigger and more powerful cards.Â Â  Upgrading walls found throughout the map and making sure to corral your enemy is the key to victory in a PvP game.

PvE games are quite different.Â Â  They play out in the form of campaigns with pre-scripted win requirements and triggers.Â  Each campaign so far has been different and interesting, although the story has been truly abysmal (I can’t even remember what it’s about and they force feed it to you during the load screens).Â  The battles against the computer opponents are quite difficult at times – especially for a newbie.Â Â Â  Perhaps one of the best parts about the campaign mode is playing with friends.Â  From what I have seen, it’s a requirement for some of these campaigns to have another person playing with you to complete objectives.

BattleForge is a beautiful game.Â Â  It has some of the best animations, spell effects, and scenery of any RTS game out there.Â  You’re allowed to scale your graphics quite a bit to get the best bang for your buck which should allow a lot of people to play.Â  I’m playing everything maxed out and I get about 40 frames with it taking a dip every so often in big battles with the spell effects.Â Â  The spell effects, again, are well done and you really get a sense of stylized enjoyment with rounded edges and a pleasant-to-look-at game.

Lag has not been an issue for me yet, aside from the usual beta issues with hangs, hitching, and stalls.Â  Given that the client says “Alpha” on it though, I’m not worried.Â  There are a few issues though which still need to be ironed out.Â  The game has a few bugs and issues with desync’ing the player.Â Â  One bug in particular that has latched onto my friend and I is the “waiting for players” bug where people get stuck at the load screen while some people can get in but get the error message of being out of sync.Â  From there, those stuck at the load screen have to alt+f4 to get out.Â  These are, however, usual issues with beta and I can’t imagine them not being fixed.

This is one of the finest experiences I’ve had with a new RTS game and the fact that it’s so different compounds my enjoyment.Â  I really enjoy the customization and dynamic battles that play out.Â  Not knowing what cards your enemy might have in his deck makes each battle truly unique and exhilarating.Â Â  Collecting cards, tokens, and points from winning to upgrade your current cards makes the incentive for playing strong.Â  Trading cards with other players creates, in a unique way for a RTS game, a persistent economy and social experience.Â Â  While I’m not sure if I would ever spend money on something like buying virtual cards for a game, I can’t deny the itch I’ve had to want more boosters to collect more cards so that I can strengthen my deck.Â  MTG Online and other online card games would easily translate into a game like this, and for BattleForge to start up without any prior card game makes it feel entirely new.

The RTS aspect of the game feels fairly balanced and polished.Â  There are obvious strategies and ones you’ll need to experiment with to find.Â Â  The game is fast paced and the lobby system allows for players to get in and get out quickly for a fast game here and there, or delve deep into the collecting and competing for cards for a more involved experience.Â  A clan system, if not already planned, would be a very nice addition to the game because it would fit right in with the persistent feel.Â  Perhaps one of the greatest feats BattleForge has been able to pull off thus far is a lobby system that rivals Battle.net – and that’s saying a lot.Â Â  At this point my only concern is whether or not you can remain competitive without buying booster packs.Â  Winning can get you some cards, but so far I believe they’re only upgrades to cards.Â  If all new cards have to come from spending money then the game will definitely become a full time hobby for anyone wishing to take it seriously.Â  If cards can be obtained by playing the game, then it will be a fantastic purchase.Â  If not, it’ll be a fantastic game for the rich.