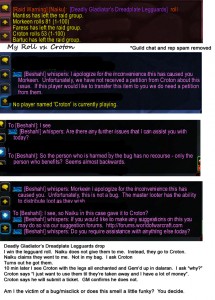 I was the victim of a well orchestrated ninja loot today. Â  A fairly good raid leader named Naiku allowed me to join their 25-man Archavon raid this morning.Â  I had gone on a few runs with this player before and their raids have always gone very smoothly.Â  In the past nothing weird ever happened and I never had any reason to speak ill of them or suspect anything but a smooth raid.

On this run the Deadly Gladiator Dreadplate Legguards dropped.Â  There was only one other Death Knight named Croton on the raid.Â  Croton and Naiku had run several instances before – including a 10-man Sartharion only moments before and a 10-man right before the 25-man Archavon.Â  In the past runs I’ve done with Naiku, Croton was always present.Â Â  When I won the roll for the item, as seen in the image to the right, the item was not given to me.Â  What happened was, Croton hearthed out and the raid wrapped up all at once and Naiku left Ventrilo.Â Â  I checked my bags and the chat window.Â  There was no usual “So and so receives loot”.Â  There was no item in my bag.Â  I questioned Naiku and he said “I gave them to you”.Â  At this point I knew that I had been duped but, feeling sick to my stomach, I tried my best to stay calm and get to the bottom of it.

Why am I posting this?Â  Because I can.Â Â  This is the first time that I have been scammed in a raid …. ever.Â  I’ve been raiding since Everquest (many PUGS – successful) and have never once fallen victim to this type of crap.Â  I’ve seen it in PUGS but never in a full blown raid where people’s reputations matter.Â  But what makes this worse is Blizzard’s system allows them to do this.Â Â  Somehow the master looter was able to avoid having the item shown to the chat window (whether by Croton hearthing or some other device) and in the process was able to smuggle loot.Â  Blizzard’s system is so backwards.Â  The person who is victimized by a “bug” (let’s assume it was a bug) has zero recourse.Â  Only the person who received the item by “accident” can submit a ticket.Â  Doesn’t that seem a little… off?Â  A customer service department that does not protect the interest of its players fails in my book.Â  Blizzard has essentially given ninja looters the perfect modus operandi.

The whole situation bothers me more than it should.Â  I guess I’m at a crossroads right now.Â  I’m playing WoW because I enjoy the story, the dungeons, the friends, and the PvE in general.Â  The PvP blows – really, really badly.Â  Do I enjoy the game enough to justify the risks?Â  I’m really not sure that I do.Â  I could play Warhammer and get a little bothered by some of the design issues but overall feel happy about my play time.Â  I feel like every day that I play WoW brings with it new opportunities to be burned.Â  I may end up going fulltime WAR again here soon.Â  I’ll keep you all posted.