The 1.0.5 patch came out yesterday and although it was gutted of all the major character and combat changes it still brought with it a few really neat additions to the game.Â  The first addition that I’ll quickly talk about is the new and very much improved Realm War page. 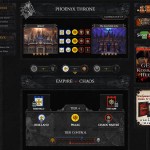 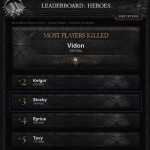 The realm war page before this update was pretty bad.Â  It didn’t have much of the information players wanted and it was really uninformative / hard to navigate.Â  The newer version gives a lot more information right at players fingertips.Â  I was able to click the realm war tab, navigate to Phoenix Throne and immediately see how the war is going.Â  When I clicked on the individual pairings such as Empire vs. Chaos then I was able to see the actual in-game victory point bars to see exactly how each realm was doing in each zone.Â  Click on specific zones further brings up a map (the in-game looking one) that will actually show who owns each of the keeps and objectives.Â  If this is done in real time then I think it’ll be very cool and useful to the players like myself who sometimes can’t log in but want to see what’s going on in-game.

While I was browsing the realm war page I decided to search the total kills this week for Ironbreakers and discovered that I was in the top 3.Â  *toots his horn*

The best addition in 1.0.5, and really what the entire patch came down to, was the kickoff for the Heavy Metal event.Â  This is the event where players can open their ToK and go to the Live Events tab and see daily objectives to complete.Â  When you complete an objective you are given a chunk of influence for your Live Event Influence Bar which determines what awards you can get.Â Â  I don’t remember what the first reward is but the second is a really neat looking cape and the Elite reward, which players can only unlock if they complete ALL the daily tasks, is the early unlocking of the new classes: KotBS and Blackguard.Â  I’m not sure what the next two weeks of events will include but I fully plan on completing all of them.Â Â  These live events add a special dimension to WAR that makes the game fun and actually draws me in to play.Â  [Note to Mythic: Duplicate this feeling in the rest of the game]

The first task yesterday was really simple: Play a game of theÂ  Reikland Factory scenario.Â  I completed this objective and then proceeded to play Reikland Factory about two dozen more times.Â  I simply can’t get enough!Â  The scenario is designed as a capture and hold style similar to how Battlefield games or even Arathi Basin are designed.Â  The longer you hold points the more tickets you generate (500 for a win).Â  The key here is that certain capture areas give different values.Â  Taking the center (the steamtank factory) will give you a chunk of tickets immediately but taking and holding the other flags will generate you more tickets over time.Â  This type of design directly encourages strategy and team oriented thinking – something the rest of the scenarios severely lack.

Reikland Factory allows 18 players per team to play at a time (3 full groups).Â  There are also something like 4 flags to capture (maybe 5?).Â  This lends itself to all sorts of strategies.Â  Does your team stick together and move as one, perhaps leaving someone behind to defend the flags, or do you split up the groups and force the enemy to fight you on multiple fronts?Â  Every game of Reikland Factory has played out differently – some have gone horribly bad for my side and some incredibly good, but most of them have been extremely close matches that all boil down to which team works together the best.Â  If your team doesn’t work together and if players go off and focus on just killing eachother like they do in other scenarios then you will lose very quickly.

The layout, attention to detail, and overall quality of design are just so well down in this scenario.Â  It looks like whoever worked on making it spent a long time perfecting it and really caring about what they were doing.Â  This level of quality does not exist in the vast majority of the other scenarios.Â  In Reikland Factory there are underground tunnels under the steamtank factory, different pathways to out meneuver your enemy, spots clearly designed for ranged to sneakily hide and attack from above, etc.Â  The atmosphere is alive and again I can’t say enough good things about it.

One of the greatest parts about this place is that it doesn’t contribute to the realm war at all, instead it just gives bonus renown (which I have yet to notice because it’s either not that big of a bonus or I don’t care because i’m having so much fun).Â  This type of system should have been used on all the scenarios.Â  I noticed that scenarios are also contributing less overall to the realm war and Keeps/Bo’s are adding more – a very nice change.

The hardest thing for me to stomach of that after the event this scenario will supposedly disappear.Â  I implore Mythic to rethink this decision.Â  Let the scenario stay so that we can continue having this level of fun.Â  Part of me has a feeling that they’re going to let it stay but that could be wishful thinking.

The patch fixed a few more things and overall was a solid patch.Â  The 1.0.6 patch will contain the character and combat changes which are looking better every day.Â  Mythic reverted their HoT nerf, reverted the DoT buff, altered the adjustments to grudge gain/decay, improved long cast heals, and all sorts of things that I completely agree with so I can’t complain there.

Alrighty, time to log in and do today’s Live Event task!