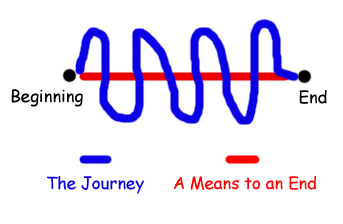 This topic has been weighing heavily on my mind for the past few months.Â  There are two forms of PvE in mmorpgs that I have played and they either fall into ‘The Journey’ or ‘A Means to an End’ categories.Â  What do I mean by those?Â  Simple…

‘A Means to an End‘ is PvE that does not leave you satisfied or will a feeling of contentment.Â  As the name hints at, it feels like it’s a means to an end and that you’re only doing it to get to a part of the game that comes after the PvE or a part of the game that you want to play more.Â  This type of PvE is common in PvP games or games that focus too heavily on the “endgame” (I recommend one of my previous blog posts for further reading).Â  Examples of obvious ‘means to an end’ PvE would be Warhammer Online, Age of Conan, and WoW (read on for clarification).

‘The Journey‘ is a type of PvE where you never think about “getting to the max level to do….” because what you are currently doing in the -here- and -now- is extremely fulfilling or highly involved in what the scope of the game is all about.Â  A good example of ‘The Journey’ would be the original Everquest because I never once thought to myself “I need to get to the max level so that I can….”.Â  The leveling process felt like an adventure or a journey.Â  Many games in today’s market offer this style of play but honestly fewer and fewer games are being designed with this in mind.Â  A few more in this category that come to mind: Vanguard, LOTRO (sometimes), and WoW (read on for clarification before lynching me).

Let me first get this out of the way: Neither form is ‘better’ that the other.Â  I like both depending on what mood I’m in.Â  I want to move on to clarifying why I included WoW though, and why several other mmorpgs can be both a means to an end and a journey of PvE gameplay.

Using WoW as an example, PvE or the leveling process in general can start as a journey but transform itself into a means to an end.Â  In World of Warcraft when I was playing through for the first time it felt like an amazing journey.Â  I wasn’t at all worried about getting to the endgame content nor did I care about much more than the next area to explore and adventure.Â  This was partially because of a sense of innocence, or ignorance of what lay ahead, but it still began as a journey all the same.Â  The third, fourth, and even the tenth time through the leveling process became all about “How can I get through these levels as fast as possible so that I can…. raid, pvp, etc”.Â  Does this mean WoW should be classified by an unbiased third party as a ‘journey’ or ‘a means to an end’?Â  I’ll leave that up to you to decide.

Some games’ PvE/leveling process begins and will forever be ‘a means to an end’ – although I will concede the point that it is partially subjective, but that’s not up for debate in this blog post.Â  Warhammer Online is the perfect example of ‘a means to an end’ PvE.Â  The tiers are laid out in such a way that you progress through them quickly, efficiently, and rather easily.Â  The game tells you precisely where to go to complete each quests and leads you, by the hand, the whole way.Â  Why?Â  Because the game isn’t about the PvE leveling process as much as anyone would have you think.Â  It’s about the RvR – a point I will NEVER concede to anyone, even Mythic if they were to argue it with me.Â  The majority of the content is experienced in the last few or very last levels in the game.Â  WAR lives on with renewable and dynamic content in the form of player vs. player interaction.Â  I can not honestly look back and say “ahh yes, I remember questing in Barak Varr.Â  The adventures I had there will be with me for a long time!” …. no, I’ll say “I remember T2.Â  It was pretty good”.Â  Notice I say T2 instead of calling the zone by name.Â  I’m purposely emphasizing the fact that the leveling process in WAR is split into tiers and the player is almost ‘removed’ from the leveling experience so that he/she does not become too attached.

Once again, neither form of PvE or leveling process is ‘better’ but I really want to encourage developers to continue making games where the PvE and leveling process is a journey; please make sure your game is designed for it though – if Mythic were to design their PvE in WAR as a ‘journey’ then it wouldn’t work for their game.Â  There are still times where I want to be sucked away into the adventures and feel attached to the here and now.