Happy Fun Guyz had our first scheduled keep siege this evening!Â  The event was planned in cooperation with Executions at Dawn, our allies in-game, and it went off without a hitch.Â  We formed up about 20 players + some pubs who were already causing a ruckus at the keep and some who followed us and stormed the castle.Â Â  With our guild standards waving high we rushed up the hill and through the keep doors destroying everything in our path right up to the keep lord’s room.

When we arrived in the room we were met with moderate resistance but they really stood no chance against our groups who were all working in decent coordination via vent and alliance chat.Â  I was able to snag the Keep lord with my taunt (I’m playing a Black Orc here) and tanked him pretty darn well given that I was level 15 bolstered to 18.Â  The great thing about taunts in WAR is that they are really ‘snap aggro’ and will pull the aggro to you immediately for some odd seconds.Â Â  We ran into a little bit of trouble when the keep lord kept running out and disappearing… I was under the impression that it looked like a pathing error with the Keep lord.Â  After a few resets we finally got him pinned under all of us and brought him down.Â  Had our guild been level 14 instead of 11 I would have been able to claim the keep for HFG, which would have been really amazing, but no such luck.

It’s really important to note here that my system performance during the siege with about 30 people in the room was flawless.Â  Easily about 40-50 frames in close quarters all beating on the keep lord.Â  I was expecting a little stutter or some form of hitching but it was remarkably smooth.Â  That’s the sense I got from most people on vent as people said “Wow, this is pretty smooth”.Â  There were a few who had issues and their system configs are unknown to me, but I am pleased with how well the game holds up on max settings for me.

After the keep siege our groups went to the Marshes of Madness and took all the battle objectives then we went to Troll Country/Ostland and defended our objectives.Â  We ended the night with a standoff with Order outside their Warcamp which was… honestly annoying!Â  The Warcamp guards interfere too much for my tastes and make it feel like a LOTRO player vs. monster standoff.

Overall a fantastic night with lots of guild cooperation and fun.Â  For those of you wondering what server we’ll be on, we’ll be announcing that information in a few days.Â  Right now we’re sitting back and observing where some of the large well-known guilds and beta communities go to so that we can choose the best server (theoretically) for us.Â  It -WILL- be an Open-RvR server (and no, please don’t start a debate in the comments about open-rvr vs. Core.Â  Save that for a blog post coming later). 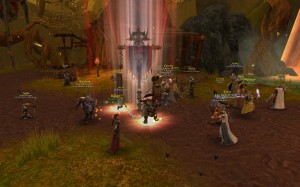 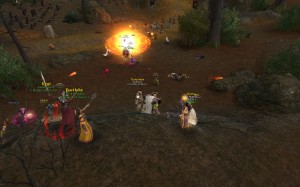