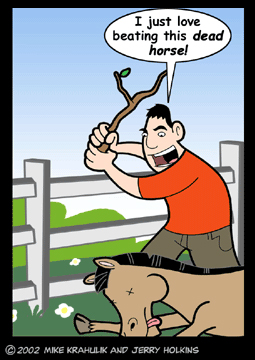 Okay, I’ll be a little more verbose. When I read something like this I get really bothered by the misinformation.

Quote that I’m referring to:

“WAR strikes me as WoW mechanics wrapped in different lore plus a couple of new features. This isn’t necessarily a bad thing. Clearly Blizzard got a lot right with WoW, but it doesn’t do much for those of us looking for that “new” experience again.”

Saying that WAR is just WoW’s mechanics packaged with a new lore and a couple more features isn’t something that can even be considered subjective. It’s a completely incorrect statement. It’s not an opinion like “the game looks boring” or “the graphics look like WoW’s” – those things I can accept as open to interpretation or personal tastes and while I can disagree with them I can’t refute them.

But let’s be realistic for half a second and take off our blinders and bury our biases. It would be like me trying to say that WoW is just EQ with a new lore. Yes, they’re both based on the same model so there will be intrinsic similarities but anyone who has played both these games knows that they are night and day different. Let’s put our blinders partially back and for a second and acknowledge that the two games (WAR and WoW) look slightly similar on the exterior. Okay, we can be superficial and point out that both use stylized graphics and use a slightly similar art style and color pallet. Now let’s take those blinders off again and look at how the games are designed. That’s right, we’re going to look at some of the general mechanics.

WAR allows you to level by PvP or PvE.
WoW’s leveling is done solely through PvE.

WAR is (at least trying) to take emphasis off of gear.
WoW is designed entirely around gear determining the strength of your character.

WAR is being designed to incorporate 5+ years of content expansion.
WoW was not designed this way thus it suffers severely from trivializing content when new content is added.

These are just a few of the vast differences in design that are traced right back to the mechanics of the game. I can’t go into more detail because of the NDA but these differences can be found throughout the very basics of combat and character stats. People need to stop looking at new mmorpgs, not just WAR, and saying things like, “Ohhh it has hotkeys you can press. Yep, It’s a WoW Clone!”. I wish that were entirely tongue-in-cheek but sadly it’s not.

These two games are entirely different, and in both cases new, MMORPG experiences. Perhaps Dan O’Halloran (author of the article on Massively linked above) didn’t mean to imply what he did but that goes to prove my last point. If you’re going to say something like that then you need to clarify precisely what you mean or else your comments are going to be torn to shreds, discounted and taken with a grain of salt (although given that Dan O’Halloran is from WoW Insider the writing is on the wall).

Hopefully Mythic wasn’t having an off day and offering up previews of WotLK at Comic-Con. Anyways, that’s my rant for the day.