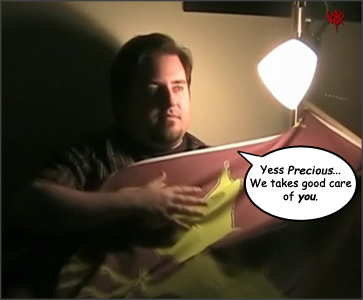 I have been INCREDIBLY busy the past few days and today has knocked me off my feet completely. I hopped on the comp long enough to discover that the links for the June Newsletter had been leaked (Thanks WHA). Yippy! Time to go through them and give my thoughts.

The video of the month was once again the cornerstone of the entire newsletter. It gave out, mostly, clarification and detail on facts that we were already given a few newsletters ago. Toward the end of the Podcast Jeff mentions “Banner Scraps” that can be used to HELP buy some of the best RvR gear. These scraps come from taking enemy standards. Overall the standard system sounds like it’s been thought out and developed to be an additional layer to RvR combat in general because of the bonuses gained from the tactics that go along with it.

The Bastion Stair looks downright sexy. I hope all the dungeons in the game will look cool and contain lots of interesting content. If there’s anything in a mmorpg that turns me off of dungeon crawling or pve in general it’s ugly and monotonous dungeons. GET THEM RIGHT MYTHIC!

The last bit I want to comment on is the White Lion grab bag info. I can’t seem to shake the monkey on my back whispering “It sounds like the WoW hunter!” Well, it’s more of a melee version I guess. Overall the grab bag didn’t do much for me in the White Lion department. I’m still not hyped about that class much, but look forward to killing dozens of them on the battlefield.

Overall… mediocre newsletter. Nothing blew me away or made my jaw drop in awe – except Josh petting the banner. As more links become available I’ll add them to the list.