I’ve been waiting to comment on the Warhammer Alliance class poll because I was hoping to see a drastic change after a week.Â  Given that the poll has been up almost six days now and the current trends are staying firmly in place I guess now is as good a time as ever to say “I saw this coming“.

I’m not a number cruncher (ugh I hate math) so I’ll leave that side of things to Snafzg and his great google spreadsheet, but it’s easy to see that Destruction is currently leading the polls against Order with a commanding lead.Â  Before I go into the why’s and all that, let me first say that this poll is not representative of how things will play out at release, nor is it anything more than an optional poll presented to registered users at one specific fansite.Â Â  Take it with a grain of salt and accept everything you hear as theorycrafting.Â  Understood?Â  Good!

As I have said before, Destruction has the most character!Â  There are guys with the ability to mutate their arms into freaking crab-like claws, Goblins screaming infamous phrases like “WAAAGH!”, and scantily clad Dark Elf womens.Â  Destruction has squigs which are basically little balls of hell with teeth waiting to bite or explode at their master’s will.Â  Order has white lions with…stuff that lions have… and attachment to their masters and … other lion stuff.Â  Those are just a few examples of many that make Destruction far more appealing, in my opinion, to the average gamer looking to decide his race/class based on looks and superficial appeal.Â  Looking at how the classes have been marketed and presented to the public, does anyone else feel a slight lean toward Destruction?Â  In an interview a while back the devs described the High Elf area as “fairyland” and then went on to describe the Dark Elf fortreses of destruction as homes to hordes of Dark Elves.Â  Which sounds more appealing to you? 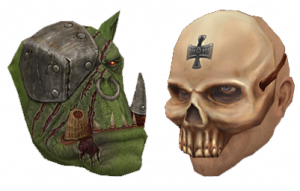 Looking at the poll this morning it appears that the Shaman class is popular.Â  This is my class of choice as well, which always makes me feel uncomfortable knowing it’s going to be popular.Â  However, there may be more at work here.Â  Massively recently revealed a lot about the classes in Warhammer Online and that Shaman was right at the front of the pack with what I feel to be the most informative and interesting insight.Â  We have not known much about how Shaman will play ever since Mythic took the servers down last year for an extended period of time.Â Â  The same can be said for a lot of the other classes.Â  Mythic has been testing High Elves vs. Dark Elves for a long time and only recently widened their testing to include Greenskins and other races.Â  The poll clearly shows that the classes that have been witheld until recently are showing popularity.

Hopefully Mythic will develop or reveal their plans to encourage balanced populations.Â  I’ll add that topic to my list of questions for E3!