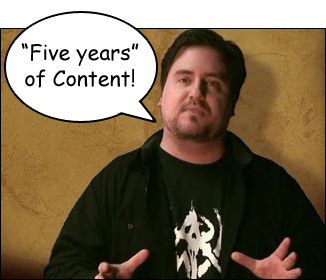 I know what you’re thinking. I thought it too. Five years of content… say what? Well, according to an interview that Josh Drescher gave to Gameindustry.biz it’s true… somewhat. Here’s a quote from the sneak peak of the incomplete interview:

“All the under-the-hood numbers all actually scale through the next five years,” he said.

“What you don’t want is when you launch the game you’ve got 40 levels – and it takes however long it takes to get to level 40. You then launch an expansion and it now takes two weeks to get to level 40 because now we need everyone to spend six months to get from level 40 to 50,” Drescher added.

“So you need to spec the game out in such a way that you actually have those progressions in mind for later – so you don’t wind up trampling all over the earlier experiences every time you expand the game.”

“We have actually five years’ worth of numerology out in front of us in terms of all that,” he explained.

How I understand this is… I think… the game is designed to accommodate five years worth of content. The math is there. The mechanics are there. Everything needed is there and ready to accept future content smoothly. But the game does not actually have five years worth of content. I think what Josh is getting at here is that WAR won’t be like, for example, WoW. WoW was not designed to have all the content of TBC added to the original game. See what happened as a result? Well, a number of things: Mudflation with items, raids and other content (like 1-60) suddenly being trivial and not the part of the game that the player or the devs focus on. Many times it’s obstacles like this that make expansions so difficult to design and release. How do you design content in such a way that it won’t make the past content obsolete? Basically you design everything from the beginning to scale up with an idea of where you want the future content to go.

We’re coming up on an age where developers are able to tell players now how much content we can expect and how long we can expect it to last. That’s not something they could or even would tell us ‘back in the day’. The true meaning or even validity of such claims is still very much up for debate. Look at Vanguard for example. It was designed to scale over 10 years up to level 200! Yeah, that will happen.

At least I can feel comfortable knowing that they have a plan. They’re not going to scramble to accommodate new mechanics. WAR isn’t going to die off from lack of content. It should be a smooth and comfortable five years.

The rest of this article should release sometime next week. Should be interesting!