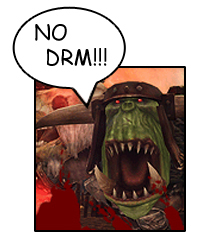 1) Dissemination of pirated copies of games is much easier now than it was even only 10 years ago. Thanks to today’s technologies (bandwidth, torrents, etc.), people can get full copies of games faster and easier than ever before from sites all over the world.

2) That piracy of PC games (in terms of sheer numbers at least) has also increased over the last 10 years. I won’t get into a debate about what the numbers are or might be (since nobody really knows) but I think we can all agree that piracy is out there and has grown over the last decade. Simple observation of both the number of sites and the material on them is irrefutable proof that piracy of just about everything is sadly alive and well. Lots of developers and publishers have spoken out about the effect that piracy has had on sales of their games and it is certainly not just EA who have felt that some type of copy protection is necessary.

3) While it is foolish to say that piracy has killed PC gaming it is equally foolish to say that piracy has no effect on PC sales. While I believe the vast majority of people are honest and want to pay for things that they enjoy, the fact remains that quite a lot of people will happily pirate everything that they can. While some people say that they will download a cracked copy of a game/film/whatever and if they like it, they will buy it, I don’t think anyone believes that everyone who says that, means it.

4) There is also no question that the technologies being discussed here and that have been used elsewhere can have a negative impact on the customer under certain circumstances. However, the old method of copy protection of PC games (key, disc 1, etc.) could also have a negative effect on customers when they lost the disc, key, etc. I am not saying that these are the same things as SR but copy protection of some kind has been around on computer games for since the Apple II. Also, it is not like EA is the first company to use SecureROM or any DRM system of the same type.

I so wish it was a different world where we didn’t have to worry about such things. I’m an avid gamer who, for most of the last 5 years, has also both traveled and had an incredibly lousy and unreliable internet connection (mine was never “always on” more like “always on except for most of the time”) and so this type of copy protection might have really affected my ability to play a game that I had legally bought. So, I can really quite easily see both sides of the issues with this or any other copy protection scheme of this type.

So, I can’t ask, nor would I ask, people to buy the game(s) regardless of the copy protection scheme since it really always is our decisions as individuals about whether a game is worth buying or in this case, worth buying even with the possible inconvenience that comes with buying a game; that is not my role here. What I would ask is that people look at all sides of the issue and not simply rush to a judgment that EA or other publishers are doing this either out of ignorance, stupidity or just greed. It really is a tougher decision that some here think it is especially when you look at the cost of some of the PC games being made these days. It’s a lot easier for the developers who make less expensive games (I was once one of those guys) to turn a profit (since they need to sell fewer copies) not to fret as much about lost copies but when you spend as much time and money as was spent on Mass Effect and is being spent on Spore in terms of both development and marketing, a significant loss of sales due to piracy can really make a difference in whether the game turns a reasonable profit or not.

Anyhow, feel free to continue the debate, just thought I’d raise a few points before turning in for the night. Enjoy! happy