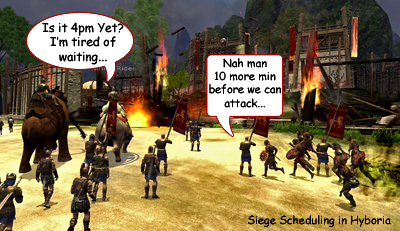 Funcom released an official article this morning (not just another IGN article!) explaining a few details about Siege PvP. This is something that I haven’t really spoken about yet because I was waiting for the information to come straight from the horse’s mouth. I want to quote Funcom directly:

“If your guild chooses to declare war on another guilds battlekeep, they will do this through the vulnerability window GUI. The Guild selects the city they wish to declare an attack on and they will be listed as a potential attacker for this battle. 24 hours prior to the fight starting the vulnerability window will be locked and an attacker is declared. At this time no changes to the attackers can be made.”

I have mixed feelings on this and I’m curious to see what others have to say. To me it feels like these Battle Keeps are really ‘removed’ from the world when they only have a vulnerability window every-so-often. Having to schedule an attack removes some of the spirit of the game for me. But on the other hand I understand that this stops the 3am raids and allows for the defending guild to do more than just sit in their keep all day. Overall I guess I am 60% for this and 40% against it. I have questions for Funcom:

– Can Battle Keeps be attacked for the sake of being attacked during their invulnerability period? (without the attackers having a chance of taking it)
– Are these Battle Keeps out in the open in the Border Kingdoms?

– Once all of the Battle Keeps are taken by the 8 “best” guilds… what happens then?Â  What if there are no other guilds on the server capable of taking a Battle Keep?Â  Will the 8 guilds who own a Battle Keep be out of the contention for sieging?Â  Could sieging potential die out?

I really hope they are in the open world of Border Kingdoms and I hope that players can hang out near them and attack passers-by. I hope that these keeps act as central hubs of activity and PvP. I want them to be more than instanced sieges between two guilds once every few days. I hope that they can be more.

Now this is something that has been slightly controversial lately. Funcom clarified how the attacking guild will be decided if there are multiple guilds wanting to schedule an attack:

“When there is a dispute between multiple guilds for the right to lay siege to a battlekeep, the Guild PvP points will be used to determine which guild should be allowed to conduct the attack.

These points will be generated for the guild by the individual players of that guild. There will be two ways that these points will be obtained. First it will be awarded to the guild if a guild member participates in a PvP minigame. Secondly, based on your feedback, we will give points when guild members gain PvP experience. The exact ratio between these two is not set, and I encourage you all to give feedback on this to help us balance the two.”

I’m glad to see that it is more than just mini-games. Having PvP exp contribute means that players who want to actively attack keeps need to be participating in ANY form of PvP as much as possible in order to accrue the points in this time period. Since you want Feedback Funcom, let me say that I hope the pvp exp gained outweighs the mini-game performance. I feel that PvP experience is all-encompassing and could even be enough on its own. This will encourage players to actively seek out PvP in the Border Kingdoms and fight over resources. You would be missing out on a great opportunity if you choose to lessen the importance of PvP exp.

Overall I think that Funcom is on the right track. Although I wish the keeps could be open to attack at any time by anyone, I still understand their decision to work off a schedule. 3am raids are annoying — I’ve had to defend against them and participate in attacks. And since they are working off a schedule and only 1 guild can attack it makes sense that the attackers be decided by their PvP efforts.