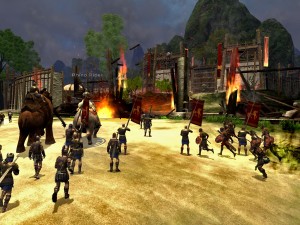 Everyone will want a city of their own in Age of Conan. Unfortunately this is something that is being reserved for only the biggest and best guilds out there. I’ve already resigned myself to the fact that I will never have a city to call home unless I give in and join a guild — it could happen. IGN released another article yesterday afternoon that brought about some interesting details regarding player cities and their bonuses for a guild, what it would take it build one, attacking/defending Battlekeeps, and who gets to own one.

Building a city actually sounds really neat. In the article the crafting system is also briefly touched upon and I am pleased to see that crafting will be less about sitting at a station grinding for hours and more about questing your way through and gathering the materials necessary. Perhaps this will be an interesting side distraction. Side Note: In the article it mentioned some of the best stuff for crafting could come from raids.. *Shake fist* But back to the building of a city, it sounds like a very detailed process that does justify them being owned by a guild powerful enough to build them. Here’s a quote from the article showing how powerful some of these bonuses for having a city can be:

“For instance, building a university might confer a guild bonus that enhances magic potency or unlocks spells nobody else has access to. These kinds of bonuses are guild-wide and will apply regardless of where you are in the game world. You’ll also need a keep, the central structure of any city, and you can set up crafting centers to unlock special trade skill recipes, along with other bonuses.”

That’s actually somewhat scary if you end up on a server with 8+ big guilds. They will all have powerful spells and bonuses. I doubt that their few spells and bonuses would be enough to eliminate a balanced competition. (I was mixing “Play Cities” with “Battle Keeps” here. This information might be inaccurate so I crossed it out.)

It’s definitely a huge incentive to own a city. Guilds will all want one of these “Play Cities”. My questions are: Can every guild have a play city? Can every guild, even casual if they put in the time, eventually have a city with buffs, etc? If the answer is yes then that is awesome. *Edit: The answer is YES! Every guild can have a Player City. Woot!

I hinted at some bad news in the title that I want to go into now. Take a look at the requirements Funcom will impose on guilds before they can siege a city-turned-Battle Keep:

“Since many guilds will likely be trying to schedule attacks on the limited number of battle keeps (there can be 8 active at a time), Funcom has implemented a priority structure. Whichever guild has members that fare better in the PvP minigames gets priority when determining who gets to lead a siege assault.”

*facepalm* In the words of Darth Vader at the end of Episode III… “NOOOooOoooOOooooOOOOooo!”

If you read my PvP weekend impressions you know that I dislike loathe these instanced mini-games. They are really unimaginative and have so little depth. They are repetitive and I find them boring. Yep, that’s my opinion. I really do not like them. I thought that the Border Kingdoms would be an escape from these but it appears that if I want -any- chance of having a BK then I’m going to participate in these mini-games. It’s probably not fair to call them mini-games anymore if they have been given such an incredibly important role in the development of a server…. but the name I came up from them would be inappropriate.

I don’t know. I guess this doesn’t impact me unless I suddenly find a guild big enough to be in contention for one of these city keeps. Funcom better make Mercenaries important in Age of Conan. I can accept Battle Keeps being reserved for the biggest and “best” guilds and I can accept their mini-game requirements. But at the end of the day unless the Mercenary system (or some other system) somehow balances things out for the smaller guilds and their role in PvP then Funcom is going to have a big mess.