[singlepic=34,320,240,,right]As the PvP Weekend draws to a close I want to take a few minutes and jot down some notes and additional feelings that I’ve been having regarding some of the classes and the PvP mini-games.

This game mode is by far the worst of the two. The rounds last less than two minutes and more than half of that is spent loading and sitting in a lobby. When the game starts the two teams never even focus on killing each other. The focus is solely on destroying the enemies resurrection totem and taking the side bases so that the enemy can no longer respawn. The only fighting that occurs happens within the last 30 seconds and you only end up having one life to live. For the time it takes to get into the battles… it just leaves so much to be desired. If only the maps required more of the players then perhaps the battles could last longer and feel less “cheap”.

I want to take back some of what I have been saying about CTF. I was very harsh on this mode prematurely. The part I want to retract is my statement that all the maps are confusing and boring. I got to play the Blood Ravine map tonight and it was really, really well done. Each team had a base and between them was a river and rope bridges. It was far more linear and interesting — far from confusing. The game lasted 20 minutes and everyone was able really experience combat and their classes in big battles. This one map redeems most of what is wrong with CTF in AoC.. but it’s one map. My original thoughts still stand for the other maps.

Overall the two mini-game modes are repetitive and not something I see myself participating in regularly. I think the biggest problem with them is that Funcom did not go the “extra mile” necessary to make “mini-games” workable in Conan. The reason? Probably because the Border Kingdoms are where the real gameplay is at. That’s where the bulk of AoC’s PvP will occur and that’s what I will hold out for before passing final judgment on the PvP of AoC.

Assassin – Really, really fun! I love the ability to execute combos from stealth and the quick attacks. This is, right now, on the top of my list. Burst damage is key for the Assassin because they can not sustain their damage over long periods of time. (My assassin video)

Herald of Xotli – A battle mage! Great damage in demon form and real potential for the future. Looking at their feat trees they will be capable of creating volcanos to erupt on their enemy. Cloth armor makes this class a challenge when being beat on, but the “cool factor” makes up for it.

Barbarian – This class deals raw damage and lots of it. Where the assassin might trump the barbarian in burst dps, the barbarian can sustain his damage over a longer period of time and take a bit more damage than the assassin.

Tempest of Set – The best healer in my opinion. It has buffs, hot’s, conal heals, and amazing nukes. It plays like a Drud in many ways. It’s a bit squishy though because the ToS’ heals are not as good as the PoM. With two disables at level 20 this class shows great promise for group play.

I’m editing this section in because it might be important to mention that I have received several emails and comments that the pvp weekend was running on the “Cheetah 1” engine which is the old engine. “Cheetah 2” is apparently the retail client that has been optimized for better performance. If that is indeed the case (and I have absolutely no proof – if anyone does please link me to it) then I hope that there is a chance I will be able to turn my graphics back up to make the game even more beautiful and capable of running on my “old” *cough year and a half old* machine. But right now I have found a happy medium. I can get 30-50 frames per second on 1440×900 with shadows and bloom completely off, AAx2, AFx10 (gotta have texture quality), and several of the texture options on medium/high. You know… maybe I’ll take a screenshot of my video options page to show you guys what I’m running it at.

ATTN FUNCOM: Assassin glitch that needs to be fixed! (See Below)

I have been playing beta pvp weekend event all morning and there are about 3 hours left until it closes. It has come to the attention of everyone participating in this pvp weekend that Assassins are currently capable of using an exploit to increase their damage. You are most likely aware of this issue, but it involves the stacking of stances. On my guardian and Dark Templar I have 900+ Hp. I was being hit by Assassins for 1250 and upwards of 1200+ damage every hit from stealth. When not in stealth Assassins were hitting me for 300-400+dmg with their offhand and 300-500+ with their mainhand. This has unfortunately caused me to log out for the remainder of the weekend since every game has at least three of these exploiting assassins.

Here are a few screenshots and a video: 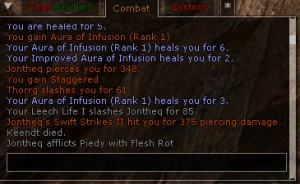 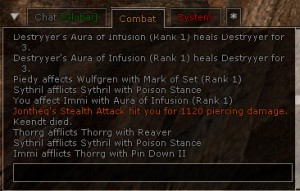 Alrighty! That’s all I have for you guys right now. I’ve really been slacking with my screenshots because of all the time spent on the videos. I have taken a few dozen that I want to share with you all so what I’m going to do is go through them and throw out the redundancies and get them posted up sometime this afternoon.

I’m very excited about open beta and the game’s release. When I think about the fun and potential AoC’s PvE has combined with the unknown potential of the Border Kingdoms I really get giddy with anticipation.