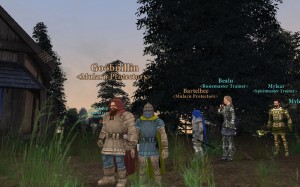 After many years of being away from the game I finally decided to head back to Dark Age of Camelot for a look at how the game has changed.Â Â  Credit for the idea of giving DAOC a try goes to my friend Bartlebe (who you will see commenting on the blog here frequently) because had he not felt the desire to try the game I would have certainly never gone at it alone.Â  We downloaded our free trials this past Saturday and the whole process took several hours thanks to a slow patching process.Â  My account information has long since been forgotten and my characters were probably all deleted several years ago so I really didn’t feel bad creating a new account to play with the trial.Â  Long story short we decided to play Midgard on the Gareth server since it has the largest population — surprisingly 950 online and when combined with the other servers clustered that’s a very healthy population for a 7 year old game.

When we first downloaded the trial the whole process was confusing.Â  There were several clients location in several locations of the Daoc website.Â  We went with the link represented most prominently with the free trial and it turned out to be only the classic+Shrouded Islands (first xpac) client.Â  That meant we couldn’t create any of the newer races or classes – argh!Â  We decided to create characters with what we had and it really wasn’t all that bad.Â  I created a Kobold Shadowblade because I love small races and Shadowblade is really the only class I didn’t max out in Midgard back in the day.Â  Bart went with a Dwarf Runemaster.Â  And Graev actually played with us for a whopping 45 minutes as a Healer but decided he just wasn’t up for giving the game another try. 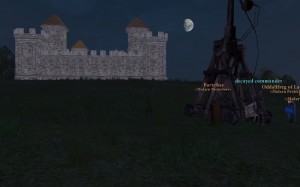 When we first logged into the game we were met with a surprise.Â  Sometime in the not so distant past Mythic added a tutorial area for newer players to learn the game and experience a plethora of mechanics and features right from the get go.Â  I was extremely relieved because this allowed for all of us to start together instead of spread out in our various race’s starting areas.Â  I was also surprised by the graphics.Â  They must have been updated because they really don’t look bad at all.Â  Even though the graphics have been updated it still has that unique feel which is awesome.

This new and improved newbie experience/tutorial is really well done.Â  It’s a large region with three towns containing lots of quests, a baby version of Darkness Falls, and even two battlegrounds for newbies to experience RvR (1-4, 5-9).Â Â Â  We made our goals very clear from the beginning: We want to RvR in Thidranki (levels 20-24) during our trial account period. To achieve that goal, as newbie players, we know that we need to take advantage of all the time we have.Â  So we decided to just jump right in to the quest lines and begin leveling our characters.

The first set of quests are very helpful in explaining the basics of the game; which admittedly I needed a refreshing on.Â  It took some getting used to and a little exploring of the UI before we were comfortable with the clunky quest and map interface as well as some of the controls.Â  It feels aged, but that’s because it is.Â  There are a lot of extra steps in the game, extra clicks and such, that have really been ironed out of mmorpgs in more recent games.Â  But I digress.Â  We blew through the newbie quests in the first in no time and were awarded with great gear and leads to the next towns.Â  Oh, and before I go on I have to mention how this first newbie town takes care of the players very well with trainers, vaults, merchants, etc.

In no time we had finished up the second town’s quests and were about level 8.Â  It’s obvious that Mythic has tried to make the game a lot more quest-centric since I last played because I really don’t remember doing more than a few quests… maybe 5.. in the newbie area before being left on my own to grind mobs.Â  Getting slightly burned out on the clunk questing,Â  we decided to head into the baby darkness falls and see if anyone was in the BGs.Â  Sadly they were empty.Â  We met a little resistance in the baby DF from some hibs but that was about it.Â  This is when we called it a night. 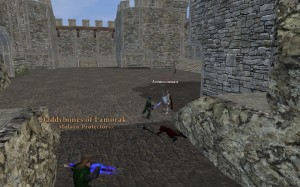 Logging in fresh for the second day was actually exciting.Â  I met up with Bartlebe and we did a lot of questing – and I mean a LOT of questing – and completed all of the tutorial town’s quests.Â  We even threw in a little grinding and were shocked to see how grossly inflated the exp is compared to questing.Â  A quest at level 11 was giving 26,000 exp and the quests take about 5 min a piece.Â  Killing one mob gave 12k exp and we could drop them consistently one after another.Â  After maybe 45-1h of grinding + running around trying to find a place to grind we were level 13 and ready to try more BGs.

We asked around in the advice channel (which we had been using a lot) for information on how to get to our level appropriate BG.Â  The DAOC community shines once again with not only half a dozen people offering the information but one nice person even giving us 100 gold pieces … 100!Â  They welcomed us to the game and buffed us and told us if we needed anything to just let them know.Â  That right there folks is realm pride.Â  That’s what it’s about!Â  Man, that got me so pumped.Â  Now it’s time to try more BGs!

We found a channeler or porter or whatever they’re called now which are conveniently located everywhere to teleport us to our level appropriate BG.Â Â  Fields of Claret, the level 10-14 BG, welcomed us with open arms.Â  An awesome sight to see when we loaded in was a lot of fellow Midgardians looking for groups to go out and fight the hibs and albs.Â  There was little to no organization so Bartlebe decided to start up a group.Â  He invited anyone and everyone he saw and we rallied everyone together to attack the central keep which had just minutes before our arrival transfered hands from the hibs to the albs.Â  We purchased a trebuchet from the siege master and made our way to the keep! 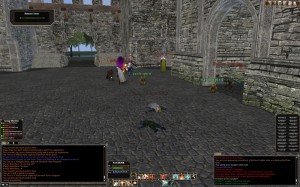 When our group of 8 arrived at the keep we set up our siege weapons and began firing upon the keep.Â  This was my first in person experience seeing the keep actually crumble and take damage as we hurled stones at the walls.Â  It took about a minute and half the keep wall’s health before a wave of albs started pouring off the walls headed straight for us.Â  “GATHER AROUND THE SIEGE!” I yelled and everyone did their best to protect Bartlebe we was vigorously continuing his siege assault on the keep.Â  The albs killed over half of us instantly and forced the rest into retreat.Â  We were not going to give up though.Â  We bought another treb and grouped up for another assault.Â  We got there, set up the 2nd treb, and began firing at the keep with both of them.Â  The side wall of the keep suddenly exploded and revealed a hole that we breached in our siege.Â  “CHARGE!”Â  We rushed through the hole and began slaughtering the albs.Â  This continued for at least half an hour as we killed them over and over as they tried defending their Keep Lord.Â  Lord Claret was too much for us though.Â  We had no healers and the constant waves of albs kept us on our toes.

As a stealther I wasn’t dying too often but poor Bart was getting slaughtered continuously. The albs weren’t stupid.Â  They knew he could 1 or 2 shot them if they left him alone.Â  After about an hour of this they eventually zerged up and overran us.Â  Ahhh.. good old albs.Â  If you can’t beat them in a fair fight then zerg’em.Â  Good to see they stick with what works.Â  But honestly we didn’t care.Â  This was the most fun in PvP that I’ve had in 5 years.Â  As Bart said when he was launching boulders with his treb, “World of Warcraft eat your heart out!”.

We plan to continue our leveling today.Â  We downloaded the Catacombs client and this will allow us to access the Kobold Undercity and other parts of the Catacombs which are apparently the best places to level.Â  Hopefully we can get a few levels and a lot more RvR under our belts.

Even though this is just a 14-day free trial and I won’t be playing beyond the trial expiration, it’s still great to be back in DAOC.Â  It feels like a completely different game on the outside but once you scratch the surface you find that the best parts of this game are still thriving.Â  Awesome community.Â  Awesome RvR.Â  Still an awesome game.