Every April Fools day I try not to be a cynic. To me all of these “jokes” were tongue in cheek funny back when it wasn’t common place for every website, company, organization, and dog to come up with something for the sake of having a joke on April 1st. However, although I think of them as cliche now, I still find some enjoyment in the “jokes” that are well thought out.

Here are links to some of the better April Fool’s Day productions (I like that word better than joke now).

Legend of Zelda, the Movie. IGN gets credit for having the best AFD production this year. If not for the day I would have thought this to be real, albeit a little corny. Above and beyond the usual crap.

Blizzard never fails to deliver the usual full on productions. This year, with their multiple titles and vast reach, they bring out the big guns.

For StarCraft 2: A Tauren Marine. Looks neat. Hope it’s in the game for real as a secret unit or at least in the map editor.

While most tauren were satisfied with their agrarian culture and primitive existence, the Confederacy was able to lure away large numbers of young bulls for a life of adventure and violence along the galactic rim. Other tauren referred to these adventurers as ‘mad cows,’ and they were ostracized from the rest of their kine. The newly created tauren marines didn’t care–they got neat-looking armor and big guns to own everyone else with. These beefy new soldiers are now an integral part of the Confederate military, and have managed to horn in on the roles traditionally filled by firebats and other infantry units.

For World of Wacraft: Molten Core, the Console game. They could have done better on this one I thought.

Another for World of Warcraft. A new class for Wrath of the Lich King: The Bard! Ironically I thought it was real at first glance — with the whole Activision CEO thing… anyway, I wouldn’t put it past them. God help us all.

To fuel his or her powers, the bard uses a brand-new resource system called “groove.” Selecting an ability launches the Fret Bar, which will display a number of riffs the player needs to activate using a new guitar-based keyboard peripheral that will ship with Wrath of the Lich King (a special Frostmourne-themed axe will be sold separately). 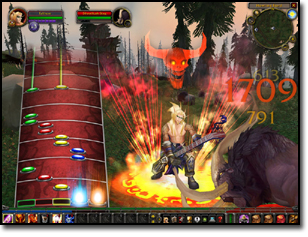 Blizzard continues to add more as I write this including a Diablo Pinata. Check out their official site since they will undoubtedly keep this up all day.

I’ll add more of the best jokes, er, productions to the list as I find them. Clicky the “more” to see any additions.

Funcom’s Prank for Age of Conan: Elves! I know what you’re thinking. “Huh!?” Well apparently it’s taboo for elves to be in the Conan lore. What better way to accomodate such a heinous addition to the game than to make them all prostitutes? They include some lore, a picture, and a rickroll.

Warhammer Online Vault pranked us with a very mean joke. WAR’s First Expansion revealed! Look closely and you’ll realize it’s the same crap from Trials of Atlantis (DAOC expansion). If you know anything about ToA you know that it ruined DAOC. Now you see why it’s mean. 😉

Lord of the Rings Online introduces a new race: The Fowl-Peoples

Welcome to the next free content update for The Lord of the Rings OnlineTM! The Battle of Amon Hen brings a new race to the table with extra crispy new skills and features!

“We loved the look of the armor on the human male so much,” said Stargate Worlds Creative Director Chris Klug, “we decided ‘Why not give it to everyone?’ The benefits are undeniable. We’ll have a lot more time to work on other ideas, such as Asgard golf.” 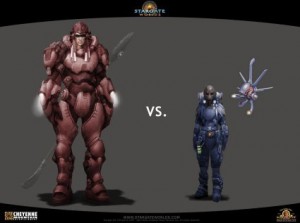 I would add more but the urge to cut out my eyes after looking at some of these is overwhelming.