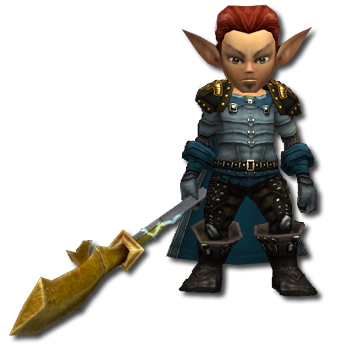 It’s Sunday again already and that means it has been another slow weekend for gaming. Graev and I have been without a MMO now for several weeks which has allowed us to catch up on some consoles and other games we had neglected. Here is an update on the games we’ve played this weekend:

Mythos. I’ve spent several hours this weekend remaking characters and playing around with the first area in Mythos. I finally settled on playing a Gremlin Bloodletter which was only half the decision making process since I still had to decide on a way to spend my skill points. In Mythos there are only three classes, but each class can be specialized several different ways resulting in an almost completely different feel. I decided to make my Bloodletter a Boulder / Blade Breaker spec since it seems to fit my style of running into combat and throwing out shockwaves all while sending out retaliatory damage when hit. I obtained level 12 this afternoon and have just about exhausted all of the quests in the first region. I look forward to a very casual experience with Mythos over the next few weeks. You can read my first impressions of Mythos here.

Bully. We’ve had Bully for a week now. I haven’t gotten around to writing about Bully yet and may never find the desire, but it’s a decent game made by the same people that make Grand Theft Auto. In many ways Bully is a GTA on training wheels that offers a similar feel without the edge. It’s a mission based sandbox game from the perspective of a 15 year old punk kid who was basically abandoned by his deadbeat parents at a private school. Throughout the game your goal is very clear: take over the school. The game stretches beyond the school and into the local town. Both Graev and I have spent a good deal of time running missions, giving wedgies, tripping people with marbles, locking lips with nerds, and all that good stuff. Graev wants me to add that he is stuck doing all the busy work like collecting rubber bands and game cards because I’m too lazy… yeah yeah you got me there Graev.

Metal Gear Solid. Graev picked up the Metal Gear Solid Essentials Collection this week and has spent a lot of time replaying through the games in preparation for when Metal Gear Solid 4 hits shelves. He doesn’t have much else to contribute there but I can already say with absolute certainty that I can’t stand these MGS games. The 10+ minute dialog scenes are enough to drive me insane. Graev finds them fascinating though… go figure.

Lost Odyssey. Another for Graev here. He’s been playing Lost Odyssey on the Xbox 360 (another game with a ton of dialog…) for a few weeks now. He’s on Disk 3 (I only know that because every so often he bellows to me that he needs me to put the next disc in… lazy bum.) and has always found these Asian style RPGs to be a lot of fun. I’m clueless about the game but it looks a lot like the standard turn based combat with flamboyantly dressed characters shouting phrases at each other before each attack. I would get him to comment more but I can’t pry him away from a Go-Cart race he’s running in Bully.

That’s basically all we’ve been playing this weekend. Next weekend I hope to bring you a slightly more interesting update, but that all relies on whether or not we actually see a change in gaming scenery. I’m hoping that I can squeeze my way into AoC closed beta but chances are I’m stuck waiting for open beta which should be coming any week now. So that we don’t send you off completely empty handed this afternoon here’s a few interesting tidbits of news/info for your reading pleasure (I’ll add more as I find it):

I hope you all had a good weekend! Enjoy the rest of your Sunday.