Since I’ll be giving Age of Conan a serious chance now, I spent the day learning more about the game and the details I consider most important. Up until this point I have really only looked into the combat system leaving the rest of Hyboria a complete mystery to me. Thanks to a few friends and a long afternoon I think I am finally feeling comfortable with what Age of Conan is all about. 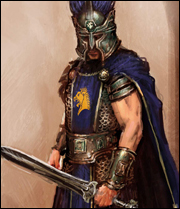 I had originally thought that Age of Conan was entirely guild vs. guild and the thought of that didn’t appeal to me. My luck with guilds is hit and miss over the past few years. The thought of having to rely on a guild to truly experience the game is enough to make me think twice. Luckily I sought clarification and read through some faqs to find that the game has a few other forms of PvP. There are arenas/bgs, Border Kingdoms (similar to DAOC frontiers), and on the PvP server there is ffa pvp. The details on the PvP server are still sketchy and I’m unclear on whether or not it’s a complete FFA server or if it’s just a “no safe areas” type. Is that info public yet?

Since I am currently guildless, and will probably remain so until the game comes out and I’ve had time to test the water, I was very pleased to learn about players being capable of joining city sieges as mercenaries. City sieges are a big part of the end-game PvP. If I can participate as a lone mercenary or even with my friends as mercenaries to earn “blood money” then that could be quite entertaining.

The size of the game world is apparently 185sq miles making it more than twice the size of most mmorpgs. The content of the game is a mix of PvP and PvE which I suppose I’m okay with as long as the PvE is more than a treadmill and the PvP is worth the time invested. In an interview with developers they talk about how they expect it to take 240 hours to get max level. I’ve always been above the average with my leveling speeds, but that still leaves a lot of potential content.

I haven’t decided on a class yet but I think I’m going for a melee DPS class class like the Barbarian or Conqueror…but the Demonologist and Ranger do look really neat… Okay so I’m completely confused on the classes and will probably be an altaholic in the open beta (if there is one?) as I figure out what I want to play.

There are still several questions that I wish I could find answers to:

I think of a new question every time another is answered. If anyone can answer the above without breaking the NDA by all means please do.

Hopefully Conan will turn out to be an extremely fun game. I could use a pleasant surprise.