Well, with the horrible news this morning I felt completely crushed. I’ll readily admit that I am really devasted by the news that I’ll have to wait until Fall to play a game that I’ve been following for years and seen delayed time and time again. The only way I’m going to 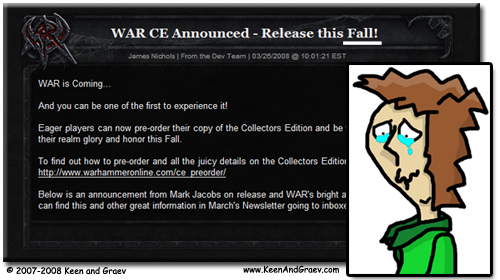 recover from this is to dig my heals in and keep pushing forward. Newsletters always put a smile on my face. Here are the contents of the March Newsletter:

I think Mythic put extra effort into this month’s newsletter. I would too if I were delivering news worthy of having the messenger shot. My favorite picks for this month are definitely the podcast with Jeff and the Grab Bag. Both have a great deal of information on cities. Warhammer’s “live cities” sound really dynamic and exactly how I have always imagined a mmo city should be designed.Â  The Video of the Month is also really cool.Â  It’s all in-game footage with Balrogs, undead orcs, giants, daemons, dragons, huge cities, massive effects… and more stuff to make me drool (especially near the end!!).

Well, that numbed the pain for a whole 30 minutes.

*wanders off to explore the prospects of a life in Hyboria*