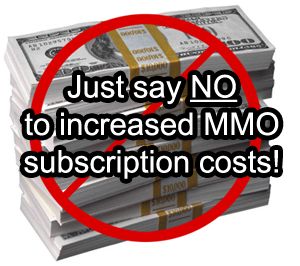 First we were paying $10 and people were freaking out asking how anyone could possibly spend that much money per month of a video game. Then the price went up again, and again, and now we’re sitting at around $14.99 as the “normal” fair for a subscription based MMORPG. To me and probably most people that’s nothing to scoff at in today’s economy. While it’s still arguably the cheapest form of entertainment out there over a long period of time, it’s still decent money. What would happen if the prices went up again? From the TenTonHammer Warhammer Online FAQ:

Q: Will the game require a monthly fee to play WAR?

A: Yes, and EA Mythic’s President Mark Jacobs has stated that the subscription fee will quite possibly be more than the standard $14.99 that most MMOG’s charge.

I don’t know about any of you, but I’m not ready to start paying more money. Maybe I can afford another couple dollars a month but let’s look at the big picture here. Where is this money going? I’m not seeing any drastic change for the better in how MMORPGs are developed and I’m certainly not finding that the customer service is any better. Server downtime is about the same if not more than it was a few years ago. Heck, server technology and the means for managing the maintenance of MMO ‘stuff’ is getting cheaper! There is more technology available today, for a cheaper price, than there was 5 years ago. Where is all our money going?

I’ll consider this a rumor until I see Mark Jacobs or someone from EA Mythic say it for themselves. I might be willing to pay $15.99 or $16.99 at the most but I doubt if it raises that it will only go up by that much. We’ll probably hear the sob story of inflation or some other political excuse. The players aren’t getting any richer and neither should you. That’s my message to anyone who would raise the price. BUT, show us that the money is being well spent and then we can reopen negotiations.

How much is too much? When is it enough? How much would you be willing to spend on the next “big” MMORPG? We might find out real soon…