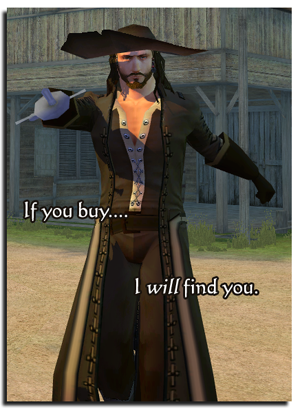 Let’s face it. You’re never going to completely remove gold farmers or the corporate RMTs from MMOs until developers are ready to take drastic measures. Those drastic measures can include introducing a heinous amount of binding, the removal of any economy all together, or several already proposed plans. But that’s a topic for another time (read: soon). Today I want to focus on the PotBS auction house and the entire PotBS economy for that matter and why I think it will be a strong deterrent for RMTs.

Pirates of the Burning Sea uses a blind bidding auction system that I both hate and love. The system can work in the favor of the seller or the buyer depending on how with it they are or how patient they can be. If I have iron that I want to sell and it is currently a hot commodity due to port contention then I want to get it on the market as soon as possible. However, a lot of other people might also be on to how hot this item is on the market and it might soon become flooded.

The trick to the blind bidding system is that the buyer never really knows what the seller is asking for when they see that iron has sold in the past for X. As the seller I want my item to sell for at least X and hopefully X*2 because it’s so hard to obtain right now. With others likely placing iron for sale the listed price is going to jump up. Here is where I can take advantage as a seller to have my iron sell before anyone else. I can run the risk of placing my iron for much cheaper than the going rate hoping that the buyers will bid the high going rate. For example I list my Iron for 100 but the going rate is 200 and the inflation has possibly driven everyone else to sell at 300. With so many listed at 300 it won’t take long for that to be the going rate. So If I list at 100 mine will not only sell first but it could sell for 300. The seller runs the risk of being taken by a patient buyer who literally starts bidding at the lowest possible bid and slowly works their way up. So you can see the immediate possible benefits for both buyer and seller.

So how does this deter RMT? First off the economy in general is very much a fast moving silver tongue business. If you’re interested in playing heavily with the economy you’ll notice that you won’t get far if you aren’t out there working with others. If you want to make ships you’re going to end up losing money if you try to do it all on your own. Work with others and all of you will benefit three times over. Each server community will develop well known buyers and crafters. People will know that Bob does a lot of business with wood logs and he’s the guy to go to for those. Jimmy has the iron market cornered and Bill has the corn. Heck, you might even find yourself a supplier who will beat all of these guys but you want to keep it a secret so that you can horde it all to yourself. Bottom line, if you can’t communicate and do business then you’re going to have a hard time. No one is going to buy from Captain CuteGirl442^_^ who can’t hold a simple conversation.

Now on top of the need to be a smooth talker you have to keep your goods safe. There’s no money to be had by sailing the safe seas. The good stuff will always be in areas of high contention. Right now in beta it seems that most of the fighting occurs in the central part of the map. When the game actually releases I foresee a possible spike in pvp activity. Soon there will be little room to run when being chased by a pirate. Gold farmers are usually not very good at the game. In WoW we would abuse the obvious farmers in PvP and run circles around them almost taunting them before we ended their lives. They are going to get completely wrecked in PotBS. They WILL get attack and they WILL lose their cargo. That’s a huge deterrent.

Now the final part of the economy that will deter RMT in PotBS that you may have noticed already, there is no ‘mail’ system in the game. These businesses use mail to transfer their goods to the buyer. Even if they manage to overcome the odds (which I bet many do) they’re still going to have a heck of a time meeting up with the person who is being an asshat and buying dubloons.

Bottom line?Â  There will be ‘gold farmers’ out there.Â  They will make money in the economy and they will adapt their methods to suit their needs.Â  However, PotBS perhaps unknowingly has gone to great lengths to deter the RMTs in the Caribbean.Â  Now all we need to do is rally around these deterrents and get a foothold in securing our waters against them.Â  Easier said than done, but slightly easier done in PotBS.

So if you see a level 5 ship sailing through contested waters don’t think to yourself how mean you would be for attacking the poor noob. Consider the contraband that could possibly be on-board that vessel. Sink’em all I say.